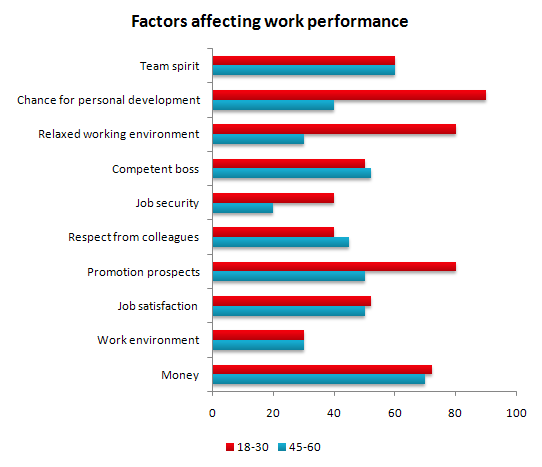 Students who have read this piece: 3,782 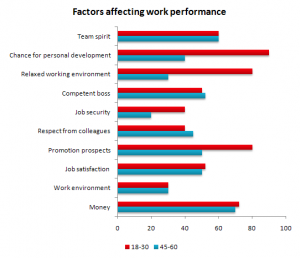 This graph description is written by one of my IELTS students. She has written a concise and organized description of the task without interpreting the data. She has started by introducing the graph and one of the main ideas. She has not only compared the various factors but also has made comparisons across the age groups, which is needed to maximize her band score. Finally, she has written a conclusion, referring to another main idea from the graph.

The bar chart below shows the results of a survey conducted by a personnel department at a major company. The survey was carried out on two groups of workers: those aged from 18-30 and those aged 45-60, and shows factors affecting their work performance.

Write a report for a university lecturer describing the information shown below.

You should write at least 150 words.

The bar chart illustrates the results of a survey on how different factors influence the work performance of two age groups, namely 18-30 and 45-60 year-olds. Overall, it can be seen that team spirit and money are the factors that equally affect the performance of both age groups.

Regarding the group aged between 18 and 30, the graph shows that chance for personal development and work environment are the most and least influential factors, respectively. On the other hand, while money affects the performance of the second age group the most, job security has the smallest effect on their performance.

All in all, the bar chart demonstrates the effects of different factors on the work performance of the two age groups of 18-30 and 45-60 year-olds. In general, it can be concluded that competent boss, relaxed working environment, job security, and promotion prospects are the factors that have different effects on the performance of the two age groups.