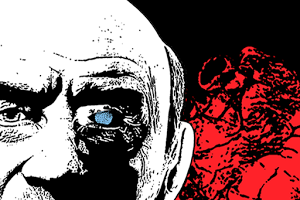 Students who have read this piece: 959

This literary essay is written by one of my grade 9 summer students. He has critically read the story and has extracted three convincing reasons to prove that the unnamed character in the story “The Tell-Tale Heart” is insane. Using quotes from the story, he has provided persuasive support for his three reasons. Finally, he makes a very valid connection in the conclusion paragraph by emphasizing public awareness about mental health issues, which can save not only the public from possible threats but also the mentally ill from guilt and remorse.

While humans are expected to feel a natural aversion to any sort of crime, some commit the most heinous ones by simply justifying the acts. Among such perpetrators are the mentally ill, some of whom still believe their insane acts of violence are committed for good causes. In his story “The Tell-Tale Heart,” Edgar Allan Poe vividly portrays an unnamed character, who has murdered an innocent old man for what he considers as an “evil eye” while still claiming that he is sane. However, his increased sensitivity, illogical thinking, and nervousness prove that he is truly insane.

Throughout the story, the main character’s increased sensitivity shows that he is insane. Even though he presents the over-acuteness of his senses as a reason to deny his insanity, he actually ends up undermining his claim to sanity. For instance, he is able to vividly hear “the beating of the old man’s heart,” described as “a low, dull, quick sound, such as a watch makes when enveloped in cotton” (Poe). Evidently, the main character has a cognitive impairment that causes him to hear such a faint sound. Overwhelmed by his increased sensitivity, the main character brutally murders the old man, which proves that he is insane.

Apart from his increased sensitivity, the main character’s illogical thinking when stalking the old man proves his insanity. He openly admits that he was not after the old man’s wealth, but instead targeted his vulture-like eye. Seeing the old man’s vulture-like eye makes the narrator angry, causing him to decide to “take the life of the old man, and thus rid…of the eye forever” (Poe). The main character’s plan to murder an innocent man because of his so-called evil eye seems absolutely absurd. His illogical thinking, a sign of mental illness, proves that he is insane.

His increased sensitivity and illogical thinking also give rise to the narrator’s constant nervousness, which is another symptom of insanity. His unexplained fear and suspicion of others is a warning sign of mental illness and results in his irrational actions. This is seen when he suspects that the police officers are actually aware of the murder and are mocking him, causing him to shriek “‘Villains!”…”dissemble no more! I admit the deed!–tear up the planks!–here, here!–it is the beating of his hideous heart!’” (Poe). The narrator, clearly experiencing severe anxiety, overwhelms himself with many thoughts and suspicions of others. This is a common symptom of mental illness, underscoring the main character’s insanity.

The main character’s insanity is evident through his increased sensitivity, illogical thinking, and nervousness, all warning signs of insanity. Poe’s illustration of the disastrous possibilities that can arise from paranoia and other mental issues emphasizes the importance of managing mental health. Victims of mental illness in today’s society may not seek assistance due to lack of awareness or stigmas associated with mental health.  Therefore, citizens’ awareness of mental health issues can not only help the mentally ill themselves but also prevent possible disasters, such as the murder of innocent people.