Skip to content
Students who have read this piece: 1,867 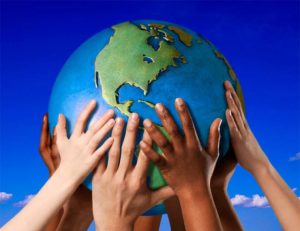 Tagging ourselves with a label will not make us a believer as a true believer is the one who, having grasped the essence of the belief, cherry-picks laws that unite humanity, rather than divide it. Blind adherence to any certain set of rules is divisive; it is the everlasting quest for truth that will ultimately unify us. This is a persuasive essay I have written with an emphasis on analogy as the major method of development.

A Theory for Unification

When Isaac Newton first published his paper on the laws of motion in 1687, little did he anticipate that in just a few centuries his seminal work would be rendered obsolete by the German-born theoretical physicist, Albert Einstein. In 1905, Einstein published his theory of relativity, proving that Newton’s seemingly accurate laws of motion break down when they are applied to objects travelling at or near the speed of light. Yet, do we despise Newton for publishing theories that were not purely accurate? Does he not deserve the respect and reverence that he has received?

Despite the recent findings in the realm of physics, we still admire Sir Isaac Newton for his astonishing achievements and will always remember him for taking science and hence humanity one step forward. He will definitely remain Sir Isaac Newton and will never be “de-knighted.” However, there remains a question that requires some contemplation. Would Newton still publish the same paper on the laws of motion if he lived in the 1900s, or would he come up with the same results as Einstein did? Assuming that Newton lived in the 1900s, the century when the laws of motion had already been discovered by an earlier physicist, being the genius he was, he would not write on the laws of motion, as such a treatise would not be regarded as a milestone in physics. To believe in Newton’s erudition is to believe he would propose either the theory of relativity or a theory surpassing it. Believing that Newton would put forth the same theories regardless of the age he lived in would seriously undermine his wisdom and should be considered a total disrespect not only to his intellect but also to his cause, which was to advance science.

A similar yet a more challenging question can be asked about Albert Einstein. If Einstein was to publish his paper in 1687, would he still present the theory of relativity? Given the fact that in 1687 Einstein would not even have access to some of the most elementary laws of physics, such as the laws of gravity and electromagnetism, it is naïve to believe that he would, out of nowhere, arrive at the same conclusions as he did a couple of centuries later. However, for the sake of the analogy that I am trying to draw, let us assume for a moment that Einstein was an omniscient scientist, which means moving him back and forth in time would not affect his knowledge of the universe. Now the fundamental question is whether an omniscient Einstein in 1687 would still resolve to publish a paper on the theory of relativity or maybe even a more advanced theory, such as the unified theory? To answer this question, we need to travel forward in time to 1915, when Einstein did develop his general theory of relativity. Given that a part of his general theory of relativity which predicted the existence of gravitational waves was just proven in 2016, more than a century after it was originally developed, how likely would it be for scientists in particular and the public, in general, to embrace such an anachronism in 1687?  Considering how backward science was in 1687, how practical would it be for an omniscient Einstein to propose his theory of general relativity? Even in case he abstained from presenting his unified theory – the ultimate theory – and resigned himself to the mediocre theory of general relativity, he would have to wait for more than three centuries for his theory to be proven and widely accepted, in which case chances are that his theories might have been consigned to oblivion before they were even considered, or he might even have been labelled a lunatic and sent to a psychiatric hospital. It is even highly possible that if the omniscient Einstein and Isaac Newton were contemporaries in 1687 and published their papers at the same time, Einstein’s theories would be overshadowed by the practicality of Newton’s laws of motion.

Moreover, as an omniscient person, Einstein would be able to foretell how impractical his theory would be perceived by his audience. He would be able to foresee the rejection of his theories, unless, of course, he were to forcefully enlighten each and every individual, inculcating them with his incomprehensible laws, laws that were only to be digested a few centuries later. Consequently, regardless of the depth of his knowledge, even an omniscient Einstein would have to withhold his ideas until such time when people were ready to absorb them; otherwise, he would be ordered to refrain from even holding his ideas, just as Galileo was in 1616.

But what if our omniscient Einstein was also omnipotent? Would he not be able to do whatever it would take to transfer the knowledge that he had to the people who had not yet invented calculus? Of course, he would. One can use the unlimited power to do whatever one desires. Nevertheless, one needs to remember that such miraculous acts that are carried out by the use of omnipotence would question the free will. There is no value in such an accomplishment when knowledge is implanted in people by means of some supernatural or unnatural power.

Given the arguments in my analogy so far, how sensible is it to adamantly and zealously adhere to a single scientist and his or her ideas regardless of all the restrictions he or she was faced with at the time of promoting them? In essence, what is the need for the belief that a certain scientist’s set of ideas are eternally correct and need to be followed even though the very same scientist would not preach the same laws if he or she was to make a return? Would the scientist whose ideas some may bigotedly follow not be surprised or even shocked at the level of the superficiality of the practice and the incongruity of the beliefs in 2017? No scientist has ever left us with an immaculate set of rules to be followed eternally; no omniscient scientist would ever leave us with an immaculate set of rules to be followed eternally, and no all-knowing omnipotent scientist would ever make us understand and follow an immaculate set of rules eternally as we – humans – are not immaculate. We evolve.

Divine messengers, in spite of their omniscience and omnipotence, are no exception to this rule. As sources of divine wisdom and inspiration, they were also assigned the task of leading people who were not endowed with an infinite capacity of perception. Given the nature of human development, which had imposed numerous restrictions upon them, the messengers must have been ordained to abstain from delivering an incomprehensible message, a message that would be way ahead of its time. Therefore, in light of the analogy that I have drawn, even the most devout followers should realize that there exists no contradiction between believing in a divine revelation and setting out to revise the laws passed down to them. One can believe holy messengers were divinely omniscient and omnipotent and yet embark on the quest for a more advanced set of laws, for even omniscient messengers would not be able to spread their ultimate message among people who were just in the primary stages of development. Therefore, revising and modernizing even divinely inspired laws should never be perceived as desecrating any divine messenger, but, on the contrary, following literally their rules to the letter would be, in fact, undermining the benevolent cause of their message.

Believing that certain messengers vouchsafed us with the ultimate laws and that there is no need to continue the search for a better understanding of the universe and its laws is the most flagrant betrayal not only to humanity but also to the messengers themselves. The search for the ultimate laws governing humanity and the universe has to be an eternal quest for truth, as it is closely intertwined with human development, which is a never-ending maturation itself. Yet, the search could be halted when bigotry, naiveté, or other evil influences penetrate and inhabit the human mind, leading to a regression in the human civilization.

What can bind humans together is this eternal search for better laws, a quest, whose disruption by any partisan mindset will only breed conflicts, giving our blue planet a more Mars-like image. When some adamantly and bigotedly adhere to a single messenger and his or her laws, denying everyone else, conflicts arise. The belief that Newton would certainly promote the same set of laws in the 21 century would shock Newton himself. In fact, such radical followers, in their futile search for truth, have failed to grasp the core of the message and have gotten stuck in the ruts of its crust.

In today’s world, one might indulge in adoration of any one messenger for spiritual thirst and mental resilience, yet there is definitely no need to turn to a single messenger for laws that can govern humanity eternally. We can admire all and still have no favourites. We may follow all and still conform to none. We can adhere to none, yet respect all. Tagging ourselves with a label will not make us a believer as a true believer is the one who, having grasped the essence of the belief, cherry-picks laws that unite humanity, rather than divide it. Blind adherence to any certain set of rules is divisive; it is the everlasting quest for truth that will ultimately unify us.

Dhiloshan Sayanthan
01:51 19 Jan 21
What I really like about George is that he teaches all the skills you need for English! It's from Vocabulary to Grammar... to Argumentative Essays to Reading Exercises to much more. George is also a great teacher and teaches nicely and patiently. When I started George, I didn't know bad my writing and vocabulary was until George explained to me and enhanced my writing.read more
Next Reviews