Skip to content
Students who have read this piece: 22,840 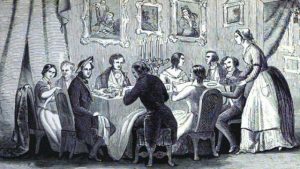 This summary is written by one of my grade 5 students. She has clearly introduced the story and included all the major details and characters very concisely. She has also included a brief statement of the story’s theme at the end of her summary.

“The Dinner Party” by Mona Gardner is about a party in India, in which a colonel and a girl argue about how women act in a crisis. An American naturalist who is at the party is watching the argument and sees the hostess, who is acting strangely, gesture for a bowl of milk to be put outside the door. The American knows that this means a cobra is in the room, so in order to get everybody to quiet down, he plays a game of control where they cannot move or they would lose money. When the cobra lunges for the milk, he shuts the door. Then, he finds out that the cobra has been crawling over the hostess’s foot, and she has had the most control in the room, proving that women can act bravely in a crisis.

Link to the story: The Dinner Party