Skip to content
Students who have read this piece: 2,533 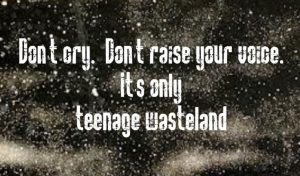 These two song analyses are written by one of my grade 12 students. The writer has analyzed the song “Baba O’Riley” using two different literary criticism approaches, namely new historicism and Marxist point of view. She has successfully referred to parts in the song that can support her interpretation of the song when viewed from these two angles.

New historicism – What language/characters/events present in the work reflect the current events of the author’s day? How are such events interpreted and presented?

The song “Baba O’Riley” was released as a single by the English rock band called “The Who” in October 1971. The lyric of this song was written by a member of “The Who,” Pete Townshend. There is a valid argument that there was a protest concept behind “Baba O’Riley.” Townshend is claimed in an interview to have written this song against the Vietnam War. It is a credible argument due to the use of the term “teenage wasteland,” which refers to the massacre in Vietnam, where, indeed, the lives of many teenagers, who were forced to fight in the war, were wasted. The chorus is based on the fact that the war-devastated Vietnam both economically and environmentally. The term “teenage” can also come from the fact that Americans had been residing in South Vietnam for over a decade since America united with South Vietnam in order to prevent this country from becoming a communist society. Furthermore, it is arguable that “Baba O’Riley” was written from a refugee’s point of view from communist North Vietnam. “I don’t need to fight to prove I’m right” indicates that the narrator wants to live normally and avoid wars. He also wants to “travel south Crossland,” hinting at the fact that the only way for him to achieve his goal is to escape to South Vietnam. Overall, the universal message that can be interpreted by analyzing “Baba O’Riley” through the new historicism point of view is that the song expresses its protagonist’s search for freedom and independence in a difficult environment.

Marxist – Does the text convey upper class, middle class, or working-class values? How?

The value interpreted in the song “Baba O’Riley” is that the working class always fights for liberty in the dominant society. This song is written to demonstrate the painful feeling of adolescents trapped in a place known as “Teenage wasteland.” The literal interpretation of the chord “Teenage Wasteland,” is that all young proletarians were sent to war to fight and die. In other words, the destructive feeling of the term “wasteland” demonstrates a literal wasteland of human beings in war fields. The protagonist of this song is not specified; however, the person’s characteristics can be recognized by the lyrics. For example, fighting for a meal is a phrase, which is usually used to describe the people of the working class. “Don’t raise your eye” is another phrase used in this song to represent the fact that proletarians had no right to speak up. In addition, based on the lyrics, the protagonist is trying to live a normal life by avoiding interpellation, accepting the ideology of the dominant society. His consciousness for questioning an unfavourable social system also demonstrates that he is willing to upgrade his values to be considered in, at least, the middle-class society. He also mentions through the lyrics that he wants to “travel south Crossland,” illustrating the fact that by leaving his own land, he can find freedom, justice, and happiness. In conclusion, Reading the song from the Marxist point of view suggests that the protagonist is from the working class and is fighting for freedom in order to live a better life.