Skip to content
Students who have read this piece: 1,772 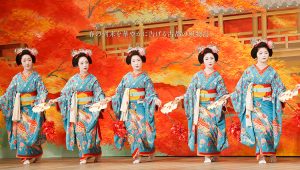 This news report, written by one of my grade 10 students, is based on the novel Memoirs of a Geisha.  The news report has a catchy title and starts off well with a lead that clearly and concisely reveals the 5 W’s. It uses quotes accurately to add reliability as well as liveliness to the news.

Kyoto – Yesterday afternoon, as pertaining to the yearly tradition, the ever so spectacular spring production of the Dances of the Old Capital took place at the Kaburenjo Theater in the most famous geisha district in Kyoto: Gion.

Following this year’s theme, which was “The Gleaming Light of the Morning Sun,” the 200 spectators were in for a splendid treat right from the beginning with the opening dance, performed by visually mesmerizing geishas in their glistening red and yellow silk kimonos, with fulgent orange and gold obis girdling their waists.

“When they started, it was like a whirlwind of magic appearing before my eyes! I have never seen such a performance! Absolutely enchanting!” said one Kyotonian, who had come to see the show with his family.

The 60 geishas displayed great skill and passion, seamlessly dancing to the melodious vibration of the shamisen and gracefully folding and unfolding their colourful fans every time they rotated around the stage.

In an interview, Nobu Toshikazu, co-founder of Iwamura Electric, stated, “I have never been a fan of these types of performances, but I must admit they put on quite a show, radiating the perfect aura for each dance! Well done!”

Impeccably emulating the effect of wind, sunlight, and water while performing her solo piece “The Morning Sun on Waves,” one maiko named Sayuri especially caught the attention of many critics.

Mameha, a legend herself, even commented, “As an older sister, I am inordinately proud of her breathtaking performance and cannot wait to see her blossom, fulfilling greater roles in future productions.”

As this year’s Dances of the Old Capital has proven to be a tremendous success, citizens look forward to the coming of next spring, hoping that the spectacle will be just as magnificent.

Molly Wu
02:14 20 Apr 19
George is a very nice teacher, and I feel really comfortable while having classes. I only had a few classes with him... but I can see that my English inproved a lot with his help.read more